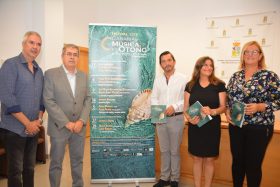 On Friday, the mayor of San Bartolomé de Tirajana, Marco Aurelio Pérez Sánchez, assessed the “positive and quality repercussion” that the extensive program of the Canarias Música en Otoño Festival in Maspalomas has for the promotional image and the cultural and touristic development of this municipality. .

Marco Aurelio Pérez, who maintained a working session with the artistic director of the Festival, Candelaria Rodríguez Afonso, thanks the organization of the event for converting the Las Tirajanas Auditorium, of Expomeloneras, into a venue for this musical event.

This edition of Canarias Música en Otoño, produced by Alma Mahler, has been held since last October 21 and until December 5 in Las Palmas de Gran Canaria and Maspalomas with the slogan ‘7 concerts, 7 emotions’.

In Expomelonera, the first 100% Templanza session was held on Tuesday, dedicated to Beethoven, starring a duo by the renowned German violinist Frank Peter Zimmermann and the virtuoso pianist Martin Helmchen.

Tonight, at 8:00 pm, Maspalomas also hosts the 100% Magic concert, dedicated to the 70-minute show ‘Lo Cortés does not take away the Gallardo’, National Prize of Flamenco Criticism Today for the best guitar album of 2015, by the artists classical and flamenco guitarists José María Garrardo del Rey and Miguel Ángel Cortés, respectively.

In addition, the festival also proposes Expomeloneras for the next days on November 16 and December 5 concerts 100% Enthusiasm and 100% Duende. The first of these shows is offered by the charismatic quartet Janoska Ensemble, made up of the Janoska (Frantisek on the piano and Roman and Ondrej with their violins), and the double bassist Julios Darvas. The second, dedicated to the show of flamenco and fusion Diálogo de viejos y nuevos sones, Giraldillo Award for Innovation at the 2016 Seville Biennial, will be starred by Rocío Márquez (cante) and Fahmi and Rami Alqhai (violas de gamba), accompanied by the percussionist Agustín Diassera.

Tickets are available at the Expomeloneras box office and also through the web www.expomeloneras.com.