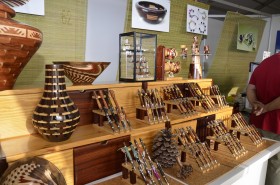 The accidental mayor of the City of San Bartolome de Tirajana, Elena Alamo Vega, opened Friday at the Faro de Maspalomas IX Craft Fair to be held until next August 15 with a performance of 69 artisans from 17 municipalities of Gran Canaria .

Elena Alamo, who serves as head of the municipal department of Culture and Social Action and the Local Development Agency and Economic Development, toured all stands of the Fair being interested in the creative work of the artisans of the island and expectations.

The fair, including transit zones and walk and two tents intended for the organization and the two generators, occupies approximately as in previous years about 1,540 m2 of garden area adjacent to the Plaza del Faro and the Hotel Costa Meloneras.

Craft Fair Summer Maspalomas lighthouse, organized by the Foundation for the Ethnography and Development of Crafts Canaria (Fedac), is one of the main informative, promotional and commercial events for the crafts of the island of Gran Canaria .

“This fair, which runs in the afternoon, from 17:00 to 23:00 hours, has become a traditional event of great interest to the population of the island and the many tourists visiting chelates at this time of year” says the accidental mayor Elena Alamo.