The Frantz & Friends Festival reaches the middle of its musical journey 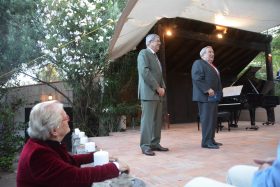 The Finca / Festival Frantz & Friends, which brings varied musical excellence to the estate of Monte León, in San Bartolomé de Tirajana, arrives already to its equator, with a phenomenal acceptance and enormous effort on the part of the organizer and universal ambassador of the municipality and of Maspalomas Coast Canaria, Justus Frantz. On Sunday, July 9, the inaugural concert of this festival was held in this year’s edition, in which Frantz personally welcomed the audience, including the mayor of San Bartolomé de Tirajana, Marco Aurelio Pérez Sánchez. The festival’s mentor said he had just arrived in Berlin, where he led the Philharmonic Orchestra at the close of the G-20 meeting “in a climate of peace, convinced that music tames behavior.”
Before the concert began with Frantz himself and the American pianist Derek Han, the mayor of San Bartolomé de Tirajana welcomed the audience, including the Deputy of the Common and renowned music lover, Jerónimo Saavedra. Marco Aurelio Pérez highlighted the figure of Frantz and the estate “as a place of imagination and creativity, an environment is unique for what has emanated and for what Justus has been able to create” in this place of fusion between music and nature.
Justus Frantz himself wanted the mayor to certify in public that the work to be performed as a world premiere was composed by the American Leonard Bernstein on the Monte Leon estate itself in 1973. It was from then on that Justus Frantz and Derek Han were Interpreting to four hands on piano the score that saw the light in this natural environment of San Bartolomé de Tirajana.
In the following days, those attending the concerts of “El sueño de una noche de verano” (Concert of a summer night) in Monte León have featured very first-rate figures such as violinist Ksenia Dubrovskaya (shared a poster with Derek Han) and pianist Ilya Rashkovshiy. In successive days, until Saturday July 15, Liana Issakadze and Daniel Petrica Ciobanu will perform at the Finca / Festival 2017, a prestigious musical event linked to the figure of Justus Frantz, a universal German who leads with honor the name of Maspalomas Costa Canaria and San Bartolomé de Tirajana in different corners of the world.