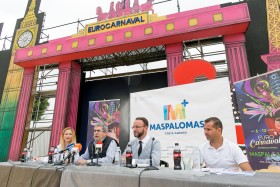 he stage of the International Carnival of Maspalomas 2017 has been dressed in monuments and buildings reminiscent of Europe, in tribute to the millions of tourists who visit the municipality “so that in this great carnival party are reflected and enjoy as at home.”
This is what the mayor of San Bartolomé de Tirajana, Marco Aurelio Pérez, said today during a press conference to present the Carnival events, which is celebrated in this edition under the slogan “Eurocarnaval”, in which he was accompanied by the Edil de Festejos y Eventos, José Carlos Álamo; The artistic director, Conchy Rodríguez, and the technical director, Oliver Armas.
Pérez invited to live the carnival from this Friday, with one of the scheduled events, which will be the inauguration, of the 12 posters that were presented to the Eurocarnaval contest at 8:00 pm at the Casa Saturninita de San Fernando de Maspalomas .
He also pointed out that the Traditional Carnival is already touring the different villages of the municipality and will arrive at the House of Culture of Maspalomas next Tuesday, February 28.
For its part, Álamo stressed that the registration record has been beaten “for the most anticipated gala Carnival, the Drag”, which has been targeted 31 candidates who will compete next March 7 on the Eurocarnaval stage, in the Preselection Drag.
Among the innovations of this year, the mayor stressed that in the mogollones will enhance musical performances not only in the carnival stage, but also in the “chiringays”, which will feature two days with DJs of international renown: Javi Reina (4 March) and Ricardo Ruhga (9 March).

Spectacular and dynamic
The Carnival stage, in the Yumbo Shopping Center, was designed by Cristian Rodríguez, and adopts buildings and monuments reminiscent of specific countries like the United Kingdom, Germany, Greece, Italy, Spain, France and Austria.
Each show will be accompanied by some 80,000 watts of illumination and 36,000 sound, as well as spectacular visual effects. The Encendido del Escenario show will take place on Friday, March 3, at 9:00 p.m.
The International Carnival of Maspalomas will enhance the spectacularity, fantasy and dynamism of its overtures, “with a decided commitment one more year by the Canarian artists and the municipality, among them, the singer Cristina Ramos who will perform a stellar performance in the two great galas of the Carnival, “said Conchy Rodriguez.
Delays by TVE and Televisión Canaria
The galas de la Reina, Queen Infantil, Drag Queen and the Great Cavalcade will arrive live to the homes of all the Canary Islands through the 2 of Spanish Television. In addition, the Drag Gala will be broadcast through the TVE International Channel.
For its part, the Canarian Television extends the coverage of the Carnival International Maspalomas and in addition to the Grand Ride March 11, will broadcast the Drag Queen Gala.
Gala Drag
The Gala Drag, on March 9, will feature the 14 drags that will have qualified in the pre-selection ceremony.
The Gala will be presented by Roberto Herrera, and Silvia Superstar, also one of the invited artists of the night, next to the group of Romania “Fly Projetc”.
The invitations to attend the Gala Drag will be distributed on Monday 6 and Tuesday 7 March, together at the box office next to the Yumbo Shopping Center carnival, two per person, presenting the ID or passport, from 10.00 a.m. 12.00 hours and from 17.00 to 19.00 hours (or until the capacity of that timetable is exhausted).

Gala de la Reina
The Gala de la Reina is celebrated on Saturday, March 4 and will have presenters to model Jose Croissier and singer Tamara, who will also perform some of his great songs.
The magic night will feature composer and singer Michael Corradini and Fruela, known for their participation in the “The X Factor” competition in Britain.
Apotheosis close
The Carnival International of Maspalomas 2017 will have an “apotheosic closure” with an outstanding bet with the Carnival in the Beach and the Burial of the Sardine, according to the mayor José Carlos Álamo.
Thus, the Carnival on the Beach, on Sunday, March 12, will feature the DJs of the 40 Principals, Óscar Martínez, already considered an “icon” of this carnival event; Dani Moreno “El Gallo”; And as a stellar performance to the musician, producer and DJ, Carlos Jean.
Meanwhile, the reading of the Sardine Testament will be performed by the popular comic canary today, Kike Perez, before the Burial of the Sardine that will conclude 10 intense days of festivities.
PRESS AND COMMUNICATION CABINET
Press@carnavalinternacionaldemaspalomas.com
Traductor de Google para empresas:Google Translator ToolkitTraductor de sitios webGlobal Market Finder
Información del Traductor de GoogleComunidadMóvilAcerca de GooglePrivacidad y condicionesAyudaDanos tu op