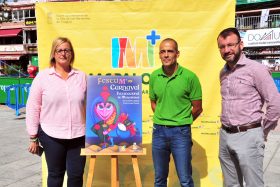 The International Carnival of Maspalomas 2018, which will be held between March 2 and 11 dedicated to the allegory of the Middle Ages, has in ‘La mirada del bufón’ its winning poster, and that on Tuesday it climbed for the first time to the usual scenario of southern carnestolendas, in the heart of the Yumbo shopping center. The accidental mayor of San Bartolomé de Tirajana, Elena Álamo Vega, and the councilman of Celebrations and Events, José Carlos Álamo, at the same time president of the jury, were in charge of presenting yesterday the winner of the contest, Maxi García, a citizen of the municipality of Tiraja. At the same time, the poster announcing the celebration was unveiled in London, within the World Travel Market tourism fair, where the first municipal authority, Mayor Marco Aurelio Pérez Sánchez, is present.
The winner of this contest, which won the victory against the 32 remaining opponents, has participated occasionally in the Carnival Maspalomas poster contest and was “very happy” for his particular triumph “and for the a citizen of San Bartolomé de Tirajana, “recalling that in recent editions the authors have been people from outside the municipality. Graphic artist and graphic designer, Maxi García graduated in Arts and Crafts from the School of Art and Design Superior of Gran Canaria.
In the elaboration of ‘La mirada del bufón’, and after the long work of the sketching, Maxi García wanted to be inspired by a somewhat ambiguous buffoon, but wanting to capture “the idea of ​​that character who in the Middle Ages was allowed unusual things to do. protection of his figure “. Maxi understands that the buffoon “was already a transgressor since then, and the carnival parties are precisely transgressive.”
In the central outline of the poster, Maxi García wanted to combine elements that contain the shield of San Bartolomé de Tirajana and the municipality itself, as “a ship on the horizon, because we are a municipality of the sea, with the arrival of the jester, or elements like the Cruz de Santigo itself, and the lion that appears on the coat of arms of the Villa, but which I have represented here with painted lips and nails, putting them in line with the joy of Carnival parties. ” Maxi García has highlighted the quality of the works presented, “the competition has gained in quality in recent years.”
The Councilman of Celebrations and Events, José Carlos Álamo, as president of the jury that qualified the election of the Carnival International Poster of Maspalomas 2018, highlighted the presentation of 33 works to qualify for the final prize “which made the decision tighter and more laborious final”. The mayor also pointed out that the opening of the telematic route for the presentation of opting posters led to an increase in the number of works, “it was a novel option that was very effective when it came to increasing the number of posters, since the system of presentation of originals “.