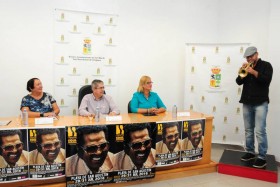 The festival, a unique event in our country, meet outdoors for two hours, “very soul, the most important figures of international soul”, on 29,30 and 31 July, on the beach of San Agustin , free

Two evenings, 29 and 30, and one day, on July 31, with free outdoor and morning workshops, performances, is the gift of the best swing and soul lies ahead for this summer 2016 the second edition of Maspalomas Costa Canaria Soul Festival. A project that returns to the beach of San Agustin, after the success last summer and brought more than 10,000 staff over a weekend with the soul of soul. A unique event in our country and has future prospects, as was demonstrated during the presentation in Maspalomas.

This year the shares iconography poster, with its namesake and original Porrettas festival in Bologna, Italy, where it takes about 26 years celebrated. This time, in both locations a tribute is paid to the legendary Otis Redding, covering much of the signage, with logos and symbols of organizers, promoters, musicians and collaborators, among which are prominently the City of San Bartolomé, which organizes and sponsors; DD & Company Productions, directed and produced, in collaboration with Porretta Soul Festival, the theater asociazoione Emilia Romagna, RTVE, neo experiencia.es and Melia Tamarindos, among others, with the Department of Culture and Events.

The presentation began with a solo by trumpeter Cesar Martel, with notes of Dock of the Bay, Otis Redding, while Marco Aurelio Perez Mayor welcomed those present. Dania Dévora producer was responsible for shelling the ins and outs of this festival and move the pride musicians contacted to participate in this festival in Spain.

Twelve artists, DJs AND WORKSHOPS
A total of twelve artists make up the program of action of the second edition of Maspalomas Costa Canaria Soul Festival, with two nights of concert and a workshop on Sunday, will include, among others, the singer Bobby Rush, headlining the Italian Festival. Along with Rush, this year we can enjoy Falisa Janaye, Stacey Merino, Toni Gren, Stan Mosley & Theo Huiff, Bey & Paule Band, mr.Kangrejo, the specialist tour Manel Ruiz or Soul DJs.

The Festival, according to its organizers, is a quality offer directed both the public resident and the visitor, and matches in the tourist area of ​​southern Gran Canaria between late June and early August. True to his birth last year, claimed in this second edition of his familiar character as an appropriate activity for small and large. It is aimed at a demanding public that demands other events, cultural and leisure activities. It has family-oriented audiences of all ages invited to enjoy the same.

Inspired by the Festival Porreta, where it is held every year during the third week of July, in the province of Bologna, he was born in 1987. Last year began in Maspalomas-Costa Canaria, with two nights of performances and morning workshops on the beach St. Augustine next to the mouth of the ravine Joseíto area. Despite the time constraints, he congregated in place more than 10,000 people, including residents, tourists and visitors. The activity, born on the island of hand DD & Company Productions and the auspices of Porretta Soul Festival, is to strengthen the already extensive existing cultural agenda in the municipality of San Bartolome de Tirajana, whose City Council has welcomed with interest and projection future, as has highlighted the mayor of the municipality and corroborate its organizers.
Traductor de Google para empresas:Google Translator ToolkitTraductor de sitios webGlobal Market Finder
Información del Traductor de GoogleComunidadMóvilAcerca de GooglePrivacidad y condicionesAyudaDanos tu opinió