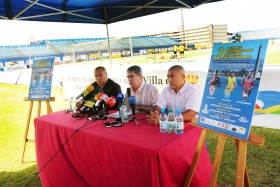 UD Las Palmas, Maritimo Funchal and Cagliari Calcio will play a competition between 5 and 7 August in the southern stadium

Three island teams make up the poster of the 31st International Football Tournament Maspalomas, to be held from 5, 6 and 7 August at the Stade de Maspalomas. UD Las Palmas, Maritimo Funchal (Madeira) and Cagliari Calcio (Sardinia) form the poster of this edition, in which the City of San Bartolome de Tirajana again opts for the formula of the triangular competition. The mayor, Marco Aurelio Perez, accompanied by the president of the UD Las Palmas, Miguel Angel Ramirez, and the Councillor for Sports, Roberto Martel, gave details of the tournament while the squad of the first team exercised on the orders of Quique Setien on Maspalomas Stadium turf.

The president of San Bartolome de Tirajana noted that after the experience of the previous edition, the triangular formula, a model never before implemented in Maspalomas, had a satisfactory outcome invites repeat.

He stressed Marco Aurelio Perez the occasion of the transfer of the tournament from January to August, a consequence of hotel prices in the winter season, combined with the participation of the UD Las Palmas, once consolidated their stay in the First Division.

The 31st International Football Tournament Maspalomas is presented as a purely triangular cut island. On 5, 6 and 7 August, Club Sport Marítimo (Funchal), Cagliari Calcio (Sardinia) and UD Las Palmas present us with a poster of First Division, according to the popularity and history of the tournament. The mayor added that Maspalomas Costa Canaria can also see benefit its projection with the presence of Las Palmas and other equipment level.

Miguel Angel Ramirez, chairman of the UD Las Palmas, thanked all the attention that the city of San Bartolome de Tirajana offer the yellow entity to the first team stay as pleasant. This year also the works of cédped in Siete Palmas Stadium, the yellow box is obliged to hold all the preseason games in Maspalomas.