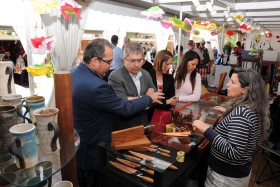 The vice president of the Cabildo de Gran Canaria and Minister of Employment, Industry, Commerce and Handicrafts, Juan Dominguez, and Mayor Marco Aurelio Perez on Monday visited the stands of the IV South Spring Craft Fair held in the forecourt of the Faro de Maspalomas until Sunday March 9.

Organized by the Foundation for the Development of Ethnography and Crafts Canaria (Fedac), this show started last March 28 with labor and artistic sample of 72 artisans, six more than in the previous edition, from 17 municipalities and representatives 27 of the 87 registered crafts the Canary Islands.

Dominguez, who appreciated the cooperation of the City in organizing the event, said that this spring fair consolidates with which it is held in August as the two “fundamental handicraft Gran Canaria” dating profile tourist attraction a hub such as Faro de Maspalomas.

The spring craft fair, which is open daily from 10.00 to 19.00, is a business opportunity for artisans of Gran Canaria can “draw” their production, hence the organization has decided this year to expand from 6 to 10 days Fair, including in those two weekends.

The improvement made this year in the tents and wooden booths and expanding market days and craftsmen, said the island adviser, “has become a saving of almost 30% of the total budget,” which according to Fedac is around 36,000 euros.

Mayor Marco Aurelio Perez showed the double satisfaction of the City of San Bartolomé de Tirajana about this show, “the consolidation of southern Gran Canaria as space crafts and trading world unique products”, and the expansion days of exposure and sales for artisans, already during the last weekend appointment could take advantage of thousands of people in the Faro de Maspalomas coinciding with the arrival of Transgrancanaria.