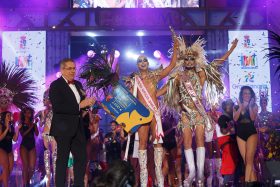 Drag Sethlas, Reinona of the Medieval Palace of Maspalomas
Maspalomas, March 8, 2018. Drag Sethlas with the fantasy “Open doors and let me in …” has risen on the night of this Thursday as the reinvents of the Medieval Palace of Maspalomas, with a design by Nelson Rodríguez and Adrián Castellano , on behalf of Pirotecnia Huracán and Bahía BCuz 21. The winner performed a show of risky and spectacular pirouettes with which he proclaimed the freedom and transgression of the Drag Gala.
A crowded and delivered audience at the Yumbo Shopping Center chanted each of the 14 performances of the candidates who exhibited madness, acrobatics, humor and a lot of pen.
Drag Múlciber received the title of Second Classified with the fantasy “Queens of a prophecy”, with a design by Borja Ferrera Pérez, Isidro Pérez and Dani Viena, representing Althay Startup Legal Machine. The jury named Drag Vanderbilt Third Class with its majestic performance “New York … New York”, a design by Iván Artiles García, representing Gran Terraza Lolita Pluma.

The night opened with the artistic cast of the Ballet of Maspalomas that entered the “Kingdom of Maspalomas”, a privileged place for its mild and warm temperatures throughout the year, which is why it is the envy of all. Despite the invasion of other kingdoms, Maspalomas could win the battle and proclaim with the outgoing reign, Drag Grio, the night of the “Carnival runaway”.

After the magnificent overture appeared the gentleman Roberto Herrera, who once again made his particular and nice appearance at the International Carnival of Maspalomas, this time, with “his great horse” Pancho. The singer Natalia Rodríguez accompanied in the presentation of the Gala.
The international duo Baccara continued the rhythm of the Gala with their hits “Sorry, I’m a lady” and “Yes Sir I can boogie”, to make way for Loco Mía with her impressive handling of fans to the rhythm of pop dance. Also, the public could enjoy the performances of Natalia and Drag Gio.
The show, sponsored by Fund Grube, could be followed live by TVE 2, the International Channel, and the rtve.es website, as well as by the Canary Television.
Mogollón
After the Gala Drag, I continue the party on stage with the Mogollón sponsored by Pacha Gran Canaria and that featured deejays Javi Row and Ezequiel Asencio.