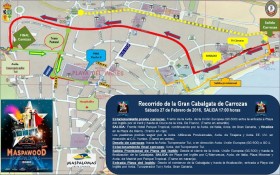 A big parade with 115 floats stars in the Grand Parade of Maspawood
The actors and actresses Maspawood Carnival parade this Saturday, February 27th through the streets of the tourist area of ​​Maspalomas, which involved 115 floats and an influx of more than 300,000 is expected extras. The Grand Parade can be watched live via TVE 2 and the Canary Television.
The Grand Parade, which will start at 17:00 hours, will have one more year their sign out front the Hotel Tropical Park, continuing along the Avenida de Italia, Avenida de Gran Canaria and end on Avenida de Tour operator Tui.
Once the tour ends, the floats parked along the Avenida de Tour operator Tui, in the Campo International. The previous parking place of concentration at the start of the ride will be located in the GC-500 (old highway south).
The quota of floats this year broke records as the Organization of Carnival closed two weeks earlier than expected to complete within the maximum established. A jury chosen for the occasion will be responsible for assessing the best decorated carriage.
Carnival organization has enabled a KML map of the Cavalcade (https://www.maspalomas.com/images/stories/pdf/CulturaOcio/Carnaval_2016/CarnavalInternacionaMaspalomas2016_Cabalgata.kmz), free application Google Earth, which can be downloaded and viewed on any Smartphone, Tablet, Mobile device, Mac or PC.
great Mogollon
After the parade, the party goes on stage at the Yumbo Centre, at 21:00 pm, with the Great Mogollon “What was the mascarita” which will feature DJ Toni Bob (Yuh FM), DJ Promaster and Orchestra “Harmony Show”.