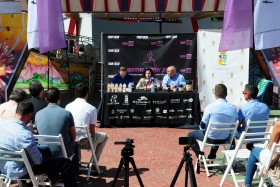 On July 9 is the date set for holding the Holidayworld Nite Rice Maspalomas Costa Canaria, test running on asphalt through the main streets of Playa del Ingles and San Fernando, and signfica the commitment to carry out a nighttime athletic test that could mean an attraction for the tourist area. Councilman Sports City of San Bartolome de Tirajana, Roberto Martel Quintana, manager of Holidayworld, Africa Padron, and the head of the organizing company Endorfinate, Octavio Gónmez, presented yesterday the test under the Ferris Wheel Amusement Park Maspalomas.

The head of tirajanero Consistory, Robert Martel, applauded the birth of a night race, “and since I presented the project made me pretty illusion, because I understood that he relishes a good test.” The municipal charge of the sports plot also highlighted the support of the commercial sponsor, making a bet on sports and health, with quality facilities, while also wanted to reflect the role of other partners of the test, such as Hospital San Roque Maspalomas.

For the manager Holidayworld, Africa Padron, this is an opportunity to “hook us to the world of running, we accept the challenge of participating in the commercial support because also sport is part of our way of working, because here in Maspalomas have a gym of more than 3,000 meters. ”

For the representative of Endorfinate, Octavio Gomez, has been instrumental in the support of these two sponsors, “the institutional and commercial, since ideas without support do not serve”, highlighting the help of the local police and Civil Protection of San Bartolome de Tirajana when designing the course. It will run in two distances, six and ten kilometers, and in both cases the output will be from the Provisional Sergeants Street and Avenue Finnair goal.

In parallel, at the facilities of amusement park Maspalomas a health fair, wellness and sports will be held, with the aim of involving relatives of those involved in the race and citizens who want to join this sporting event of the summer.