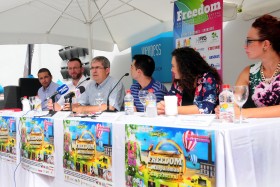 The first edition of Freedom Gay Pride Maspalomas, to be held from 6 to 9 October, wants to turn the south of Gran Canaria at the epicenter of the festivals, closing the summer season worldwide. And the good climate of the islands, can prolong leisure activities outdoors.

This has been explained today at the press conference presenting the event, held at the Hotel Axel Maspalomas Beach. It was attended by the president of the organization, Fernando Ilarduya, mayor of San Bartolome de Tirajana, Marco Aurelio Perez, Councilman Celebration, Jose Carlos Alamo, director of Axel Beach, Mireia Pérez, the representative of RS Sonocom, Anibal Pinochet, and the director of nursing at the Hospital San Roque Maspalomas.

“This is a new concept, pioneer in the Canary Islands, linking music, tolerance and fun in equal parts. This festival of festivals bring the south of Gran Canaria large national and international festivals with sessions recognized djs. To this must be added the transgressive celebration galas full of varied performances of singers and drags, “said Ilarduya. Who he stressed that this festival “the winter tourist season is ahead” in fact now already “almost impossible to find alojamieto in southern Gran Canaria”.

To present the event, the organizers have come some of the best clubs in Spain. In addition, the Freedom bet “by the Canarian talent” hence the poster artists count on the archipelago singers in addition to international artists like Cascada or Sean Moore Miley eurovisiva.

In his speech, Councilman Celebration commented that this initiative is “a cool event and coming to stay.” “The agenda of events related to the LGBT population increases Maspalomas proposal to remain a benchmark and thus multiply the promotional effect” of the tourist destination, said Alamo.

For its part, the hotel manager Axel guaranteed that the establishment “is at 95% occupancy and there are excellent results at a general level in the tourism sector” on the occasion of the arrival of this festival.

To maintain security and proper course of this event, the San Roque Maspalomas Hospital said that thanks to the “medical and health coverage” that will be “a small hospital with human and technical team to have a healthy entertainment will be installed” all events.

The representative also said that RS Sonocom for this appointment “a display of about 100 m2 which will be the main axis of the stage will be placed, there will be 20,000 to 40,000 watts of sound and lighting”.

The mayor of San Bartolome de Tirajana closed the press conference stating that this festival responds to “a pending task of putting closure to gay festivals in the world”. “We needed something in October, where there is no play action in Maspalomas and through the Maspalomas Gay Freedom Festival is an opportunity to do so”. For the mayor, this event will contribute to that in October “back to not having trouble filling” accommodation “this activity is important enough to be a strong pole of attraction” for tourism, Marco Aurelio Pérez concluded.
Traductor de Google para empresas:Google Translator ToolkitTraductor de sitios webGlobal Market Finder
Información del Traductor de GoogleComunidadMóvilAcerca de GooglePrivacidad y condicionesAyudaDanos tu opinió