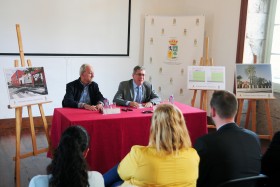 Maspalomas will host the Museo Canario before the end of this year.

It is the first time the Museo Canario have a seat outside Las Palmas.

The Barcelona Casa de Maspalomas will be an extension of the scientific society, which the mayor considered “as a step in the cultural growth of the municipality”

The mayor of San Bartolome de Tirajana, Marco Aurelio Perez Sanchez, and the president of the Canary Museum, Diego Lopez Diaz, yesterday gave details of the existing agreement between the two institutions for the establishment of a museum in Barcelona Casa de Maspalomas. Thus, the southern municipality and the scientific community reached a groundbreaking agreement, which is the outflow of funds from Canario Museum based in the capital of Gran Canaria.

The fundamentals of the agreement between the parties are well advanced, in the absence of written plasmación and submission to the official legal steps as appropriate. In the 140 year history of the Museo Canario “is the first time given a major make ourselves visible step away from headquarters,” said the president of the scientific organization based in Vegueta.

The mayor of San Bartolome de Tirajana stressed that this agreement and the establishment itself Museum in Maspalomas, is “another step in the growth as a society, it leads to a change in cultural values” placing value on the alliance with the museum entity “and use this emblematic space as the Barcelona House.” The City Council will make a transfer of space Museo Canario, who will take any actions necessary for the establishment and staff.

President of the Canary Museum, Diego Lopez, said that “it is not normal to receive an answer as given to us by San Bartolome de Tirajana, their support is an example as a municipality, and we are ready to assert that we will establish impossible to get in another town on the island “level.

El Canario Museum Maspalomas occupy the two squares of Barcelona House, you will have nine modules museological informative contribution of Gran Canaria, from before human settlement until today. You want to install a current museum, as attractive as possible, with guided tours in three languages ​​(Spanish, German and English) visits and opening times to make it more comfortable for residents and tourists. The president of the Scientific Society said there will be reduced rate for residents in San Bartolome de Tirajana, in addition to other special conditions for certain groups, similarly headquarters in the capital.